We like Malaysian part of Borneo and deciding on staying for some time we called Mrs Nabistul from Sandakan Seaview Hotel, who is a helpX host. She accepted us after phone interview and we agreed on few weeks’ stay at her place – free double room and board from her recently opened cafe downstairs for our help in promoting and managing restaurant and hostel. And that was just a peak of an iceberg of challenges we found there! 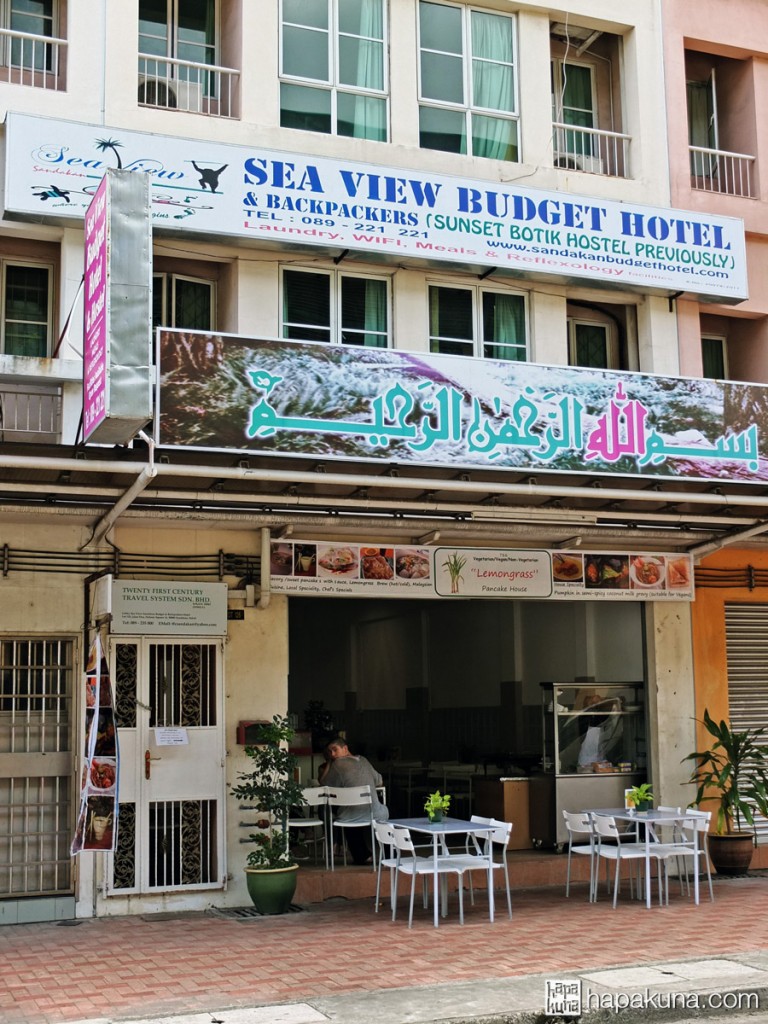 People that say “Tawau is no wow” should go and visit Sandakan 🙂 There is nothing really special about the town, apart from it being a transit place for Kinabatangan river safari or few day trips to turtle island. You can also check out the orangutans and probiocis monkeys while they’re being fed on platforms if you fancy such entertainment (well, we don’t, really). 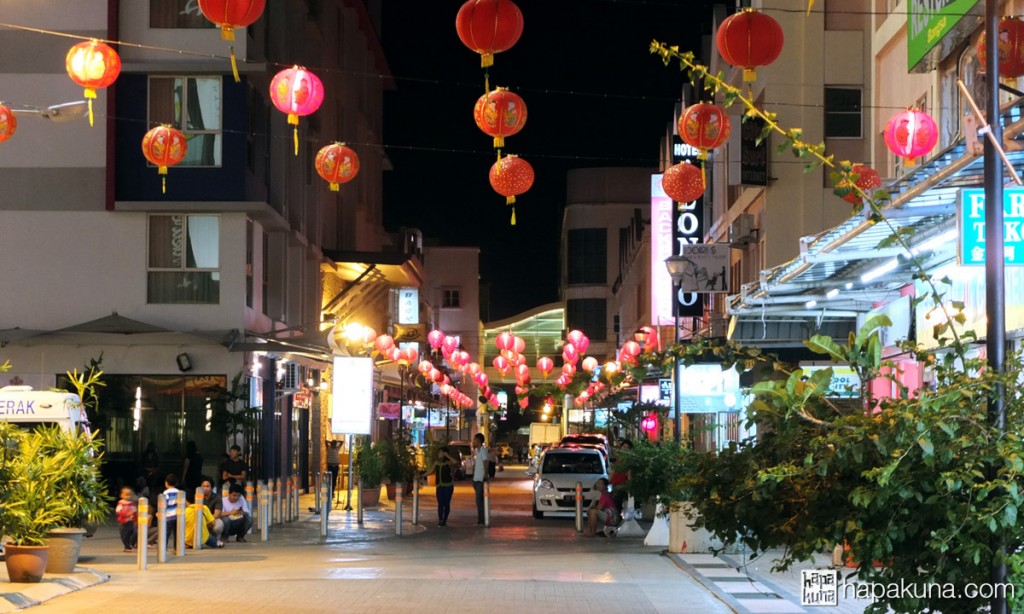 But don’t take me wrong – this place is far from boring, we had so much fun at the hostel and cafe and met colorful characters from all over. 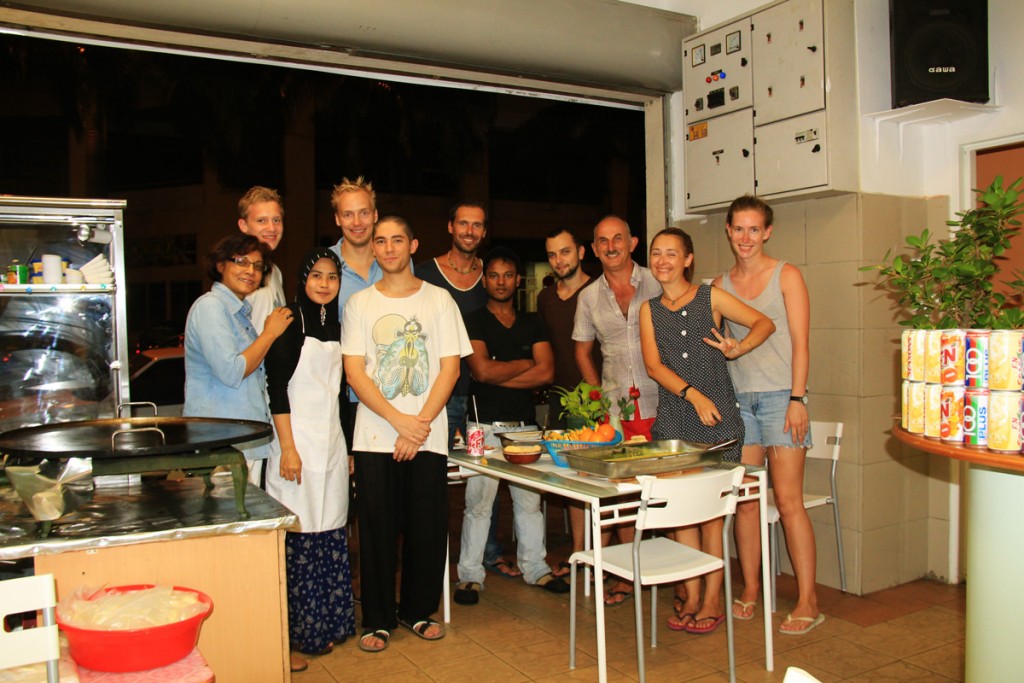 I like John Cleese and Fawlty Towers came to my mind when looking for an eye-catching title. Sandakan Seaview and Lemongrass Cafe gathered a crazy bunch of people – ready cast for a drama 🙂

We have The Boss, who is wholeheartedly (converted) Muslim – it was really interesting to see her prayers few times a day in proper white clothing (even being happily recorded by some of the guests) and her explicit talks about religion and ethics till 4 AM were really one of a kind. 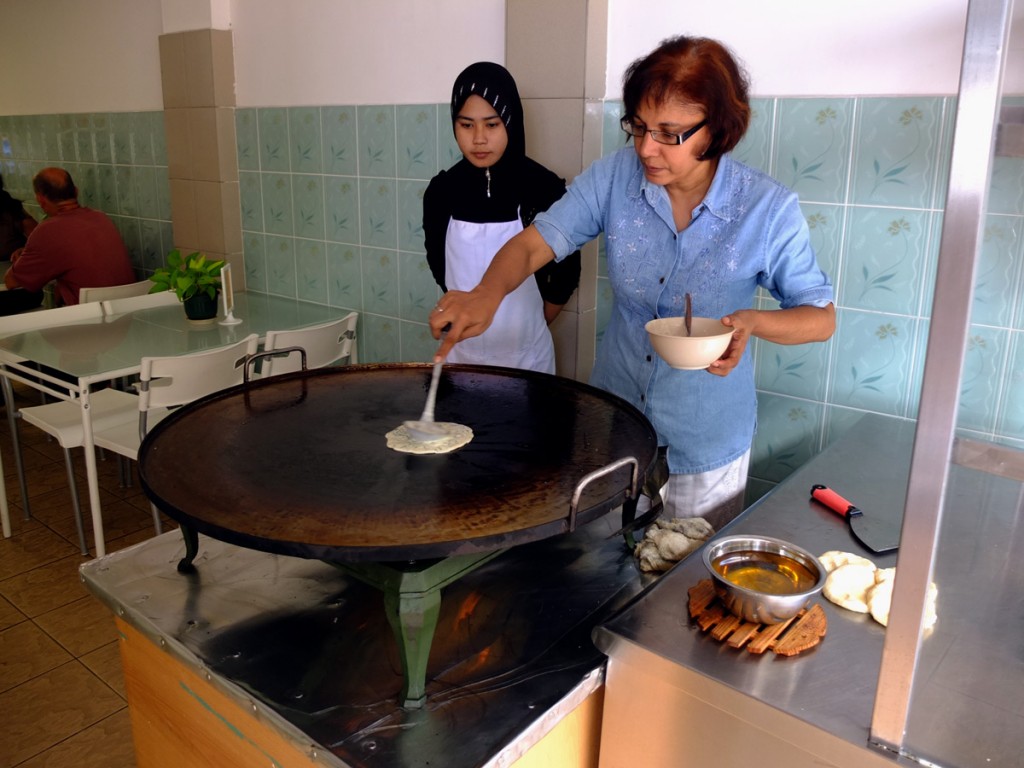 Sweet Cherry – the lovely and lively Philipino girl, young, pretty and hard-working cleaning lady with a big smile – who won’t fall for such a sweetheart? Some Hungarian postman sure did 🙂

Amazing Mark – yet another guy from Philipinnes, they really make us want to visit their country! Mark is not only the funniest, most energetic person who actually manages the whole place. He’s an amazing cook (separate post about his kinilao coming soon), even better musician and super positive friend to joke around with for countless hours (he reminds me of Manuel in Fawlty Towers somehow, he’s everywhere at the same time, making the scene hilarious). 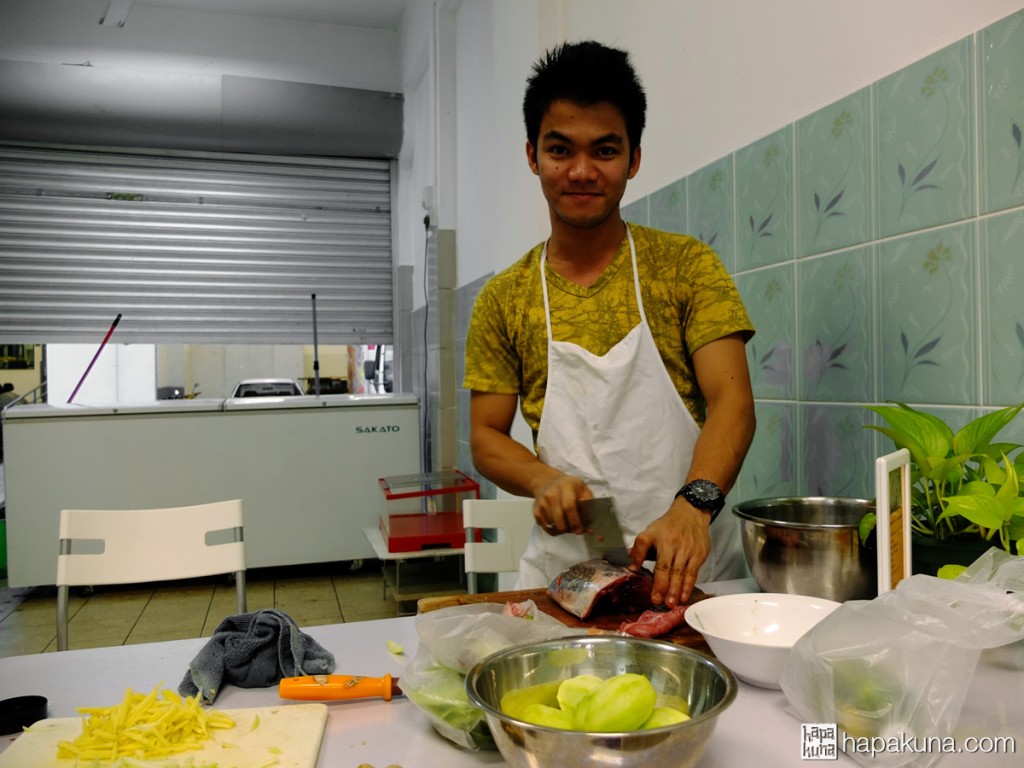 Meet Latino-Imano 🙂 Imanol was a helper like us, who conquered Malaysian girls’ hearts with his Spanish soul and puppy eyes 🙂 Together with Imanol we painted hostel’s dormitory, bathrooms, kitchen and dining room giving them a fresh and cool look. 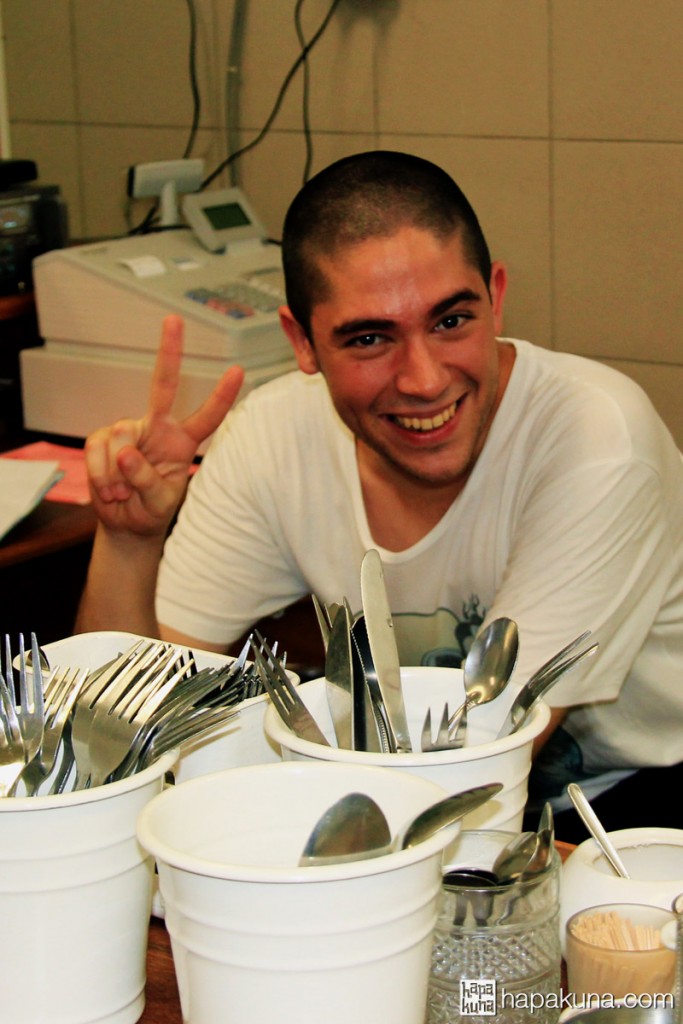 With such a cast it was always interesting, even if on occasion too dramatic especially with Azis the Roti Master and Barmaid Saudia’s troubling romance. It was quite surprising while we had to look for the Chef around the town, when customers ordered food and he was in his jealous mood wandering around in the dark… 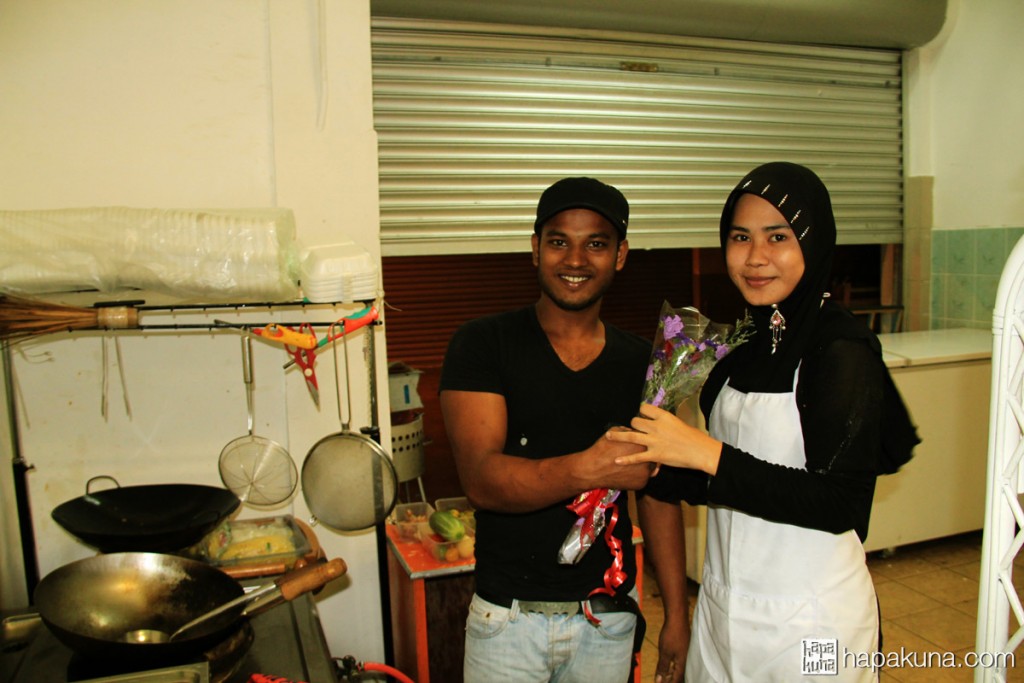 In those few weeks we’ve spent there we managed to promote the cafe/restaurant – from redesigning the logo, localising and designing menu and vacancy adverts to moderate and update Facebook page. In Sabah you sometimes feel like the most obvious things are impossible to achieve and Malay people are known for their lazy, chilled-out attitude towards work… so we feel even more proud to achieve so much while having so much fun at the same time! The trick is – you just need a lot of healthy distance and good sense of humour. After all we found ourselves on another continent, among people with different beliefs and expectations. 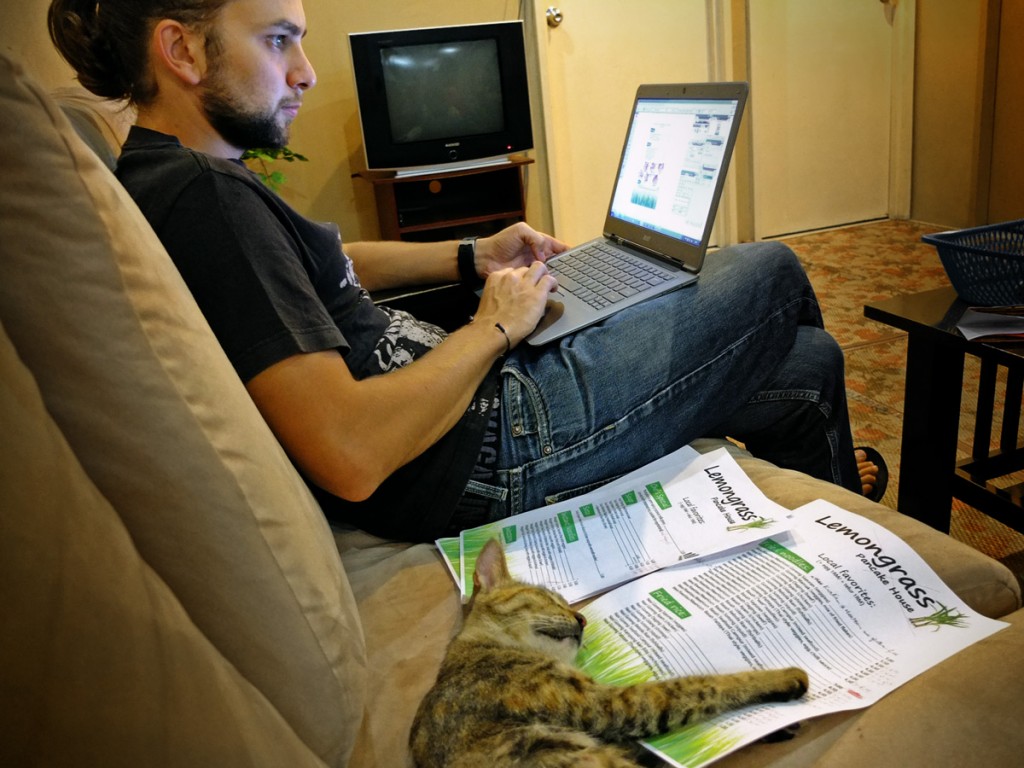 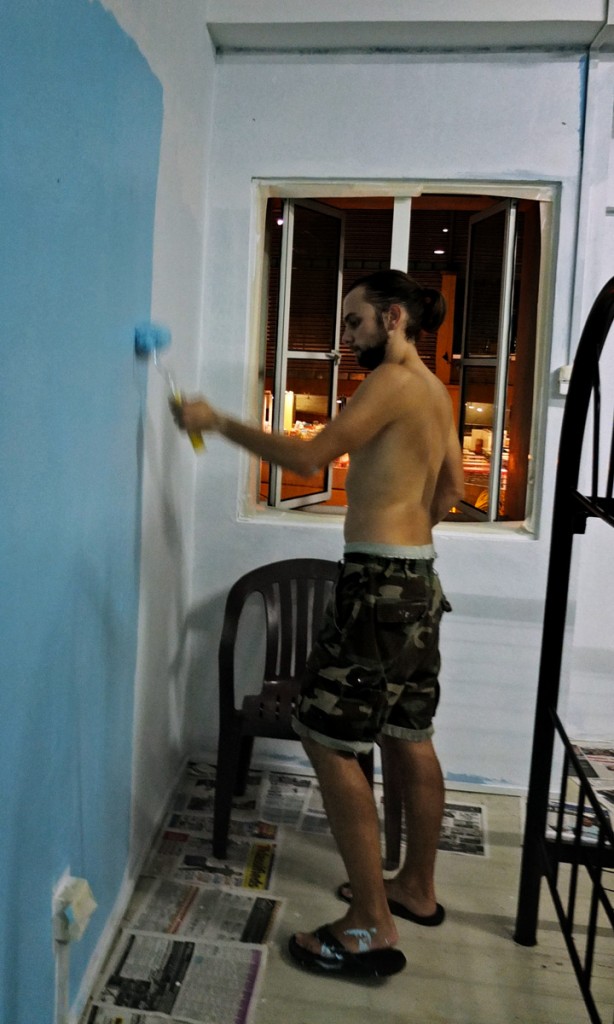 All in all, thanks to this project we gained more hands-on experience in managing B+B/hostel kind of place in tropics and met many interesting travellers as part of our job was check-ins and check-outs, phone and internet bookings and, yes, chatting with all those wonderful guests. Some of them we caught up with later on during our Taiwanese trip and we sure follow footsteps of others who we’d met at Sea View Hotel. It’s hard to talk about working hours, it was always something else to do and we felt part of the place, so noone really counted how much time we spend every day. We did plenty and we had plenty of laugh too 🙂